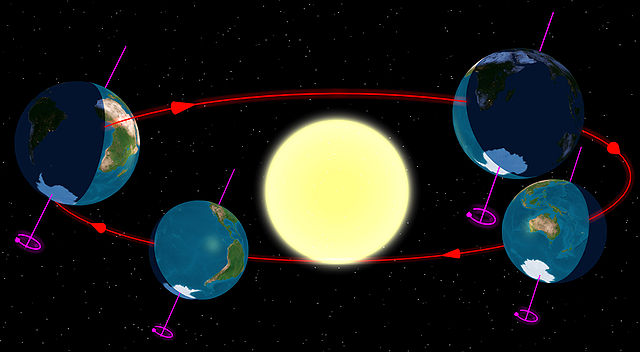 I checked the time—10:30 AM. Then the date—June 20th. I knew I was north of the equator, so only one explanation remained. What I observed meant I was standing south of the Tropic of Cancer. Sometime during the next day or two, the Earth, on its way around the Sun, would pass a point called the Summer Solstice.

The Summer Solstice occurs every year sometime around 21 or 22 June. It marks one of four special positions [link] the Earth crosses as it orbits the Sun. The other three positions are called, in order, the Autumnal Equinox, the Winter Solstice, and the Vernal Equinox, after which the annual cycle repeats. These special points exist only because the Earth doesn’t sit up straight. Instead the Earth’s axis—the line running through the North and South Poles—lays tilted 23.5° off of vertical.

When the North Pole points exactly towards the Sun, Earth’s northern hemisphere begins summer and also experiences the longest day and shortest night. We call that day the Summer Solstice.

Six months later when the South Pole points exactly at the Sun, the northern hemisphere begins winter and experiences the shortest day and longest night. We call that day the Winter Solstice.

Halfway in-between those two days, when the Earth’s axis is exactly vertical, day and night are equal in both the northern and southern hemispheres. We call the first—about 21 March—the Vernal Equinox. The second—about 21 September—is named the Autumnal Equinox.

Curiously, that knowledge comforted me. Why? I’m an astronomy nerd, so my interest made sense. But there was more to it.

That day I stood where people spoke languages unknown to me. The food tastes good, but unlike anything I normally eat. The traffic rules—or lack—bewildered me. I could neither mail a letter nor ask for directions to save my life. I was totally dependent on others—not the most comfortable situation for an American from the wild-west.

But yesterday, when I saw my location on our planet’s surface and then our position in orbit around the Sun, my world clicked back into place. I no longer depended on culture or language to orient myself. Instead, I stood on a solid base unaffected by human whim. And that reminded me how our immense universe is, itself, contained within an even larger reality. Nice to know how I fit into the big picture.