1. The engine’s power: The engine(s) must produce enough power to move the aircraft fast enough to make the wings work.
2. The wing’s lift: The wings, given airflow, must produce enough lift to raise the aircraft off the ground.
3. The airframe’s strength: The airframe must hold its own weight, plus the fuel, cargo, passengers and crew in their designated places during taxi, take off, climb, maneuvering, descent, and landing.
4. The performance margin: The gross weight of the aircraft must leave enough margin for the airplane to be controllable throughout all of its expected motions in both still and turbulent air.

Their engineers work hard to find the sweet spots where all four factors balance well enough to make useable machines. But after they do, I must still load my airplane within both weight and the balance limits. 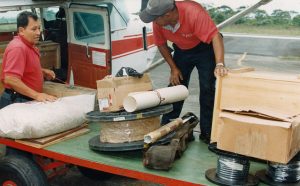 Maximo and Panchito plan how to arrange a heavy load. After their work, I was still responsible to ensure that it was legal and safe.

I can easily exceed the maximum weight by stuffing in too much cargo, seating too many passengers, or filling the tanks with too much fuel. Then, when I try to take off, I might stagger into the air unable to climb out of ground-effect and fly into the first obstacle in our path. Or, I might not leave the ground at all but careen off the end of the runway into those same trees.

Once, on a stressed-out day in the jungle, I trusted a helpful passenger. He estimated his cargo’s weight, then loaded it into my airplane’s pod. The takeoff run was just a little longer than normal, but on climb out, I barely cleared the trees. Back at our base, I re-weighed everything—passengers and cargo. Turns out I’d made that takeoff 200 pounds over gross weight. Since then, regardless of the extra time, I never deviate from my routine of personally confirming the weight of everything going into my airplane.

Balance can be trickier.

Side-to-side limits are easy to manage. If I burn too much fuel from a wing-tank on one side, the worst consequence will be a sore arm holding the other, heavier wing up for level flight. My routine for long flights is to set a reminder to switch tanks every half-hour. For the short hops between neighboring strips, I switch to the fullest tank before take off.

If I place the load too far forward, the airplane will become too stable. In that condition, I won’t be able to raise the nose for takeoff, or—worse—flare for landing creating a long, sometimes smoking, trench in the runway.

One time, I was assigned to fly a 350-pound VIP on an aerial tour. I moved the front passenger seat all the way back then helped him fasten his seat belt and harness. I’d added all the weights and knew the aircraft was below gross weight. But then I considered the empty airplane behind our seats. I excused myself for a moment and calculated the fore-and-aft center of gravity. It was well beyond the forward limit. Securing a 100-pound bag of rice in the aft cargo area solved the problem.

But if I place the load too far aft, the airplane exhibits the opposite problem and become too unstable. Random wind gusts or slight pilot inputs will easily upset it and the aircraft may even become totally uncontrollable.

I often flew passenger-cargo combinations out of jungle villages. Loading the mix to keep everyone safe in the event of a sudden, inverted stop proved challenging. Passengers had to sit only in approved seats, using 4-point safety belts and shoulder harnesses. Cargo inside the cabin had to be secured with an approved combination of net, straps, and belts. 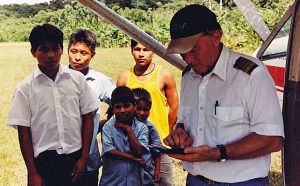 Calculating the aircraft’s weight and balance for every takeoff took a lot of time, but provided satisfyingly boring flights.

Sometimes I had to make several trial calculations to find an arrangement that kept the center of gravity within the aft limit. Correcting the arrangement often meant adjusting passenger seating. Once I had to move a very lightweight, very VIP doctor all the way to the rearmost seats and then put a very large, “no-name” passenger in the co-pilot’s seat next to me. The doctor wasn’t happy, but I achieved the goal of giving her a boring flight.

The weighing and computing process could not be skipped and frequently took longer than doing the flight itself.  Remembering those safe flight disciplines reminded me that the trick to keeping my life straight and level was first, I shouldn’t pick up more than I could carry. Second, I must spend whatever time and energy is necessary to balance my load—before I try to move.