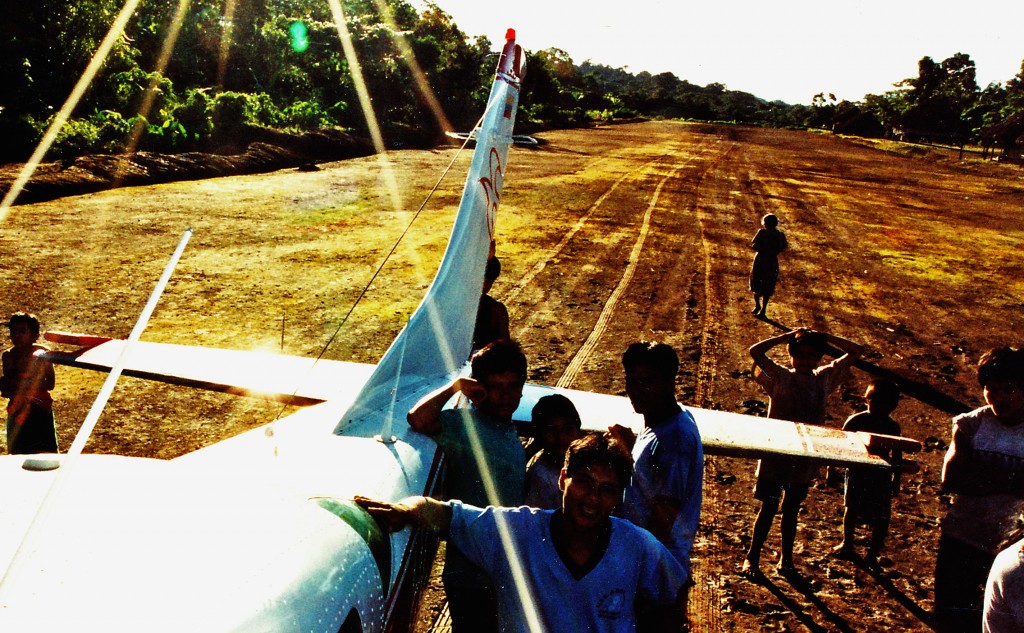 Checklists done? Yep. Engine still sounding good? Yep. Abort point confirmed? Yep. Departure path reviewed? I pictured where the plane’s wheels would leave the ground, how I’d hold that heading until just past the end of the strip, then the slight right turn that would keep me over the water and away from higher ground. The air was clear. No worries. I’d be able to see the cliffs well before they threatened—if everything worked right and I paid attention. 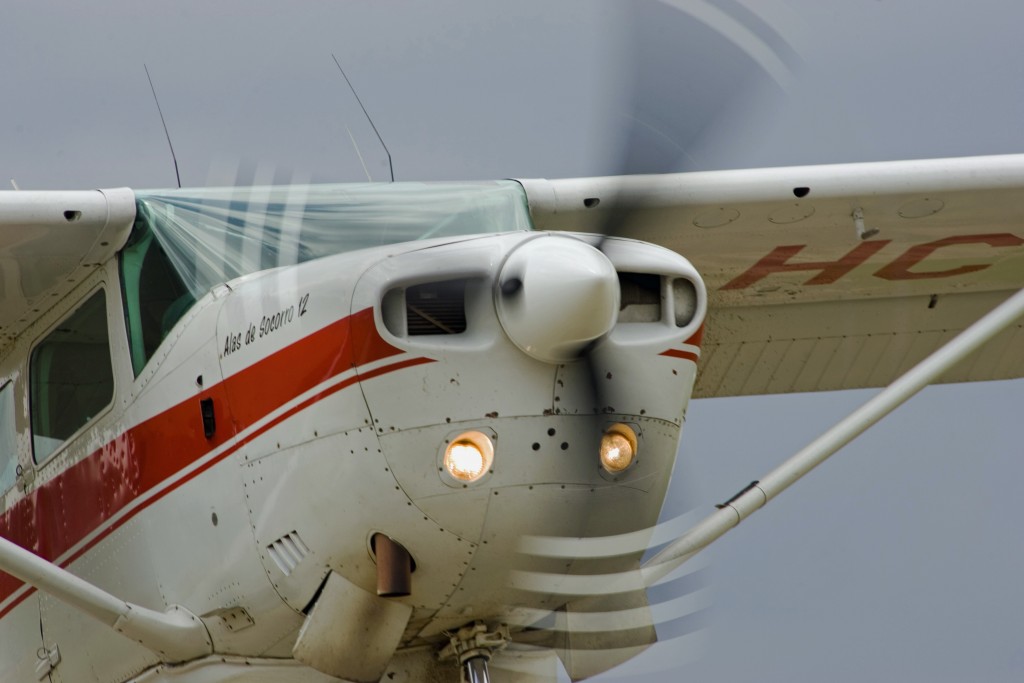 The 71pound, 6.5 foot propeller converts 310 horsepower into an amazing amount of thrust

The idling engine rocked the airplane. Nothing left to do but go. I pushed the throttle all the way into the panel, but held the brakes. Gentle swaying turned into roaring protest against restraint. Checked vibrating engine gages. All good. Looked outside again. Nobody and nothing in the way. I released brakes. We leapt forward, gained speed, and left the ground where predicted. As the end of the airstrip passed beneath, I turned a bit right and climbed between opposing canyon walls. After a minute, I rose above their tree adorned tops and turned on course for Shell. As I established a cruise-climb to 6,500’, it occurred to me how much I depended on the fan in front.

The turbocharged, 520 cubic inch (8.5 liter), 6-cylinder engine produced 310 horsepower for takeoff. But no amount of horsepower would benefit me or my passengers unless the 71 pound, 6.5 foot-diameter propeller in front converted that spinning energy into thrust. Wings might hold the airplane up, but the propeller made them work. 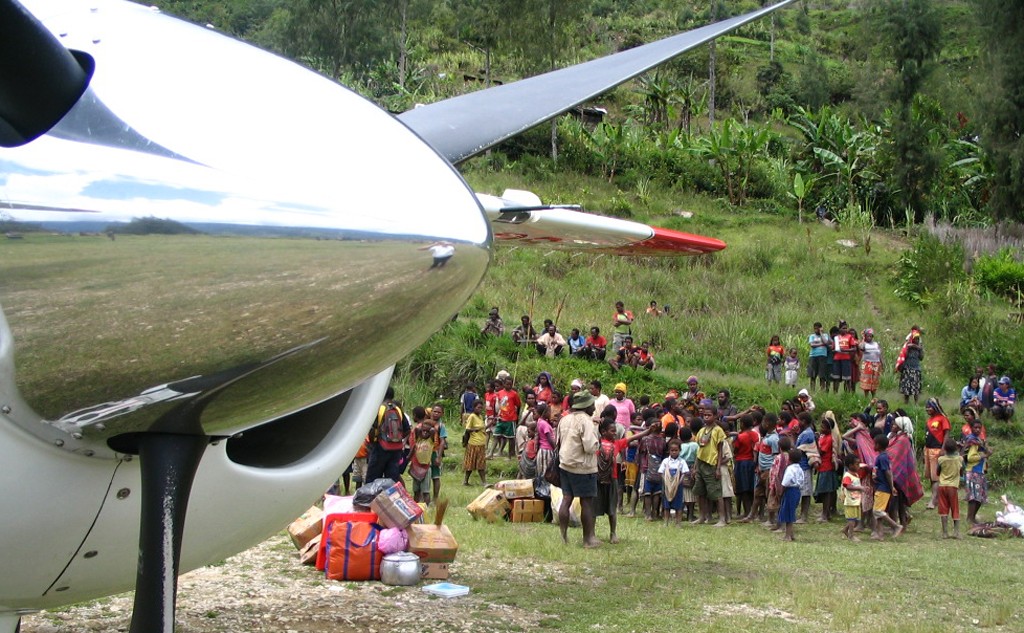 Propellers look simple. Closer inspection, however, reveals complex form that requires precise design and fabrication. The engineer must balance five forces to produce safe, efficient thrust. The manufacturer then fashions each blade into a small wing whose airfoil shape changes continuously along its entire length. The blade is also twisted to present a changing angle of attack. Designing propellers presents such complex challenges that its amazing they work at all. After he and his brother, Wilbur, designed the first airplane propellers, Orville Wright explained,

“… it is hard to find even a point from which to make a start; for nothing about a propeller, or the medium in which it acts, stands still for a moment. The thrust depends upon the speed and the angle at which the blade strikes the air; the angle at which the blade strikes the air depends on the speed at which the propeller is turning, the speed the machine is traveling forward, and the speed at which the air is slipping backward; the slip of the air backward depends on the thrust exerted by the propeller, and the amount of air acted upon. When any one of these change, it changes all the rest, as they are all interdependent on one another. ” McCullough, David (2015-05-05). The Wright Brothers (Kindle Locations 1315-1321). Simon & Schuster. Kindle Edition.

Level, heading directly west into the sun, I leaned the letter-sized map board against the windscreen to block the glare my helmet visor couldn’t curb. Ironic. Clear day. Couldn’t see anything in the direction I flew. None the less, I occasionally slid the stiff rectangle right and left, peering around the edge to hunt for traffic.

And in the glare my mind turned to the prop again. On one hand, Wilbur and Orville’s months long obsession made the difference between success and failure. No prop, no movement. No movement, no flight. No flight, long walks. On the other hand, the propeller’s twisted blades thrashing a mad onrush of spiraling air seemed a lot like life somedays. Everything changes everything else. Nothing’s fixed. Circumstances turn. Relationships twist. Impossible messes tempt me to give up, to hide. 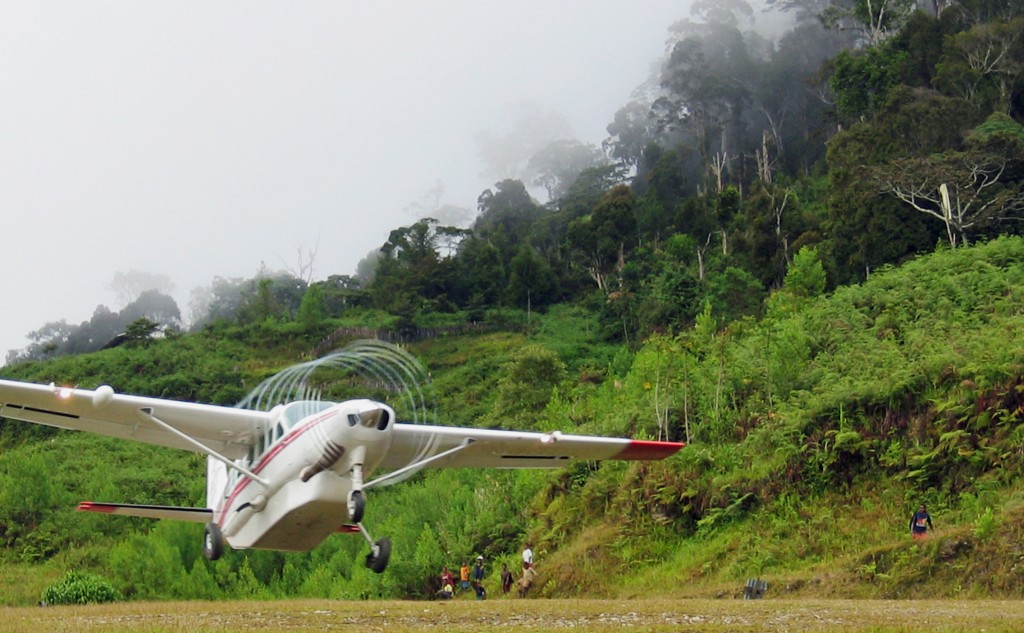 As a Cessna Caravan takes off from a jungle airstrip, its propeller leaves a spiraling condensation trail in the humid air

Fortunately, Wilbur and Orville didn’t quit. First, they learned that only changing blades could harness changing air. Second, driven almost to exasperation, they finally concluded the only way to fully prove a propellor was to use it on a flying airplane.

And those two genius bicycle makers reminded me how to thrive amidst chaos. First, I couldn’t let myself get stuck in one way of thinking, speaking or doing. Second, my past was set, unchangeable, gone. I possessed only that moment, that flight, that day. My only route to success was to press on towards the goal: hold heading and altitude, land with passengers and aircraft intact, and reach for God’s upward call.

Twenty miles out, I transitioned from wilderness to civilization. I returned the map board to its place between the seats, pressed the mic button and called approach control.