Turns out it depends on how we stick it together. We could, for example, scrunch up aluminum foil, adding wad to wad, until we fabricated a substantial, solid mass. It might be robust but would weigh too much to fly and leave no room for motors, fuel, cargo, passengers or even, oh yeah, the pilot. Fortunately, the Germans developed a method a hundred years ago to make the skin a structural member rather than just streamlining. The technique, not widely used until the 1940’s, later acquired a French name: monocoque that literally means “single shell.”

First, bend thin aluminum sheet in strategic places to make stiff forms called ribs, stringers, longerons, etc. Next, connect some forms together, then cover them with aluminum skin to make a strong box. Produce aluminum boxes in useful shapes such as cabins, cockpits or wings and, if assembled correctly, voilá, an airplane emerges. That marvelously simple concept carries us across continents and oceans and even took us to the moon.

But, as someone once pointed out, the devil lurks in the details. Putting bits and pieces of flexible aluminum sheet together into precise shapes demands careful attention. Wings work only when formed exactly right. Ask any pilot who’s ever struggled to stay aloft with 1/4″ of ice on the wings.

The Vans Aircraft kit Ron acquired not only provided him with the right pieces to build the wing, it came with pre-drilled holes in each piece. Even with that, though, he still had to temporarily assemble the pieces before he could permanently assemble them. Tape and twine lacked the necessary precision, but a fastener called a “Cleko” worked perfectly. 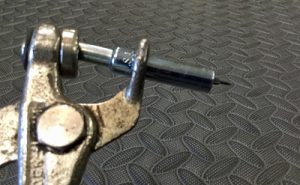 Cleko pliers push the big end, on the left, down. Then the thin pins, on the right, extend ready for insertion into a hole.

Using special pliers, push down on the big end of the cleko. Insert the extended thin tip into the aligned holes of two or more aluminum pieces. Releasing the pliers retracts the tip into the cleko body, tightly squeezing the aluminum pieces together. Doing that with enough holes keeps the box in the correct shape. Then, one by one, fill the empty holes with rivets, replacing clekos as necessary. Eventually, the 70-pound wing Ron and I riveted together will support half his airplane’s 1,800-pound gross weight. 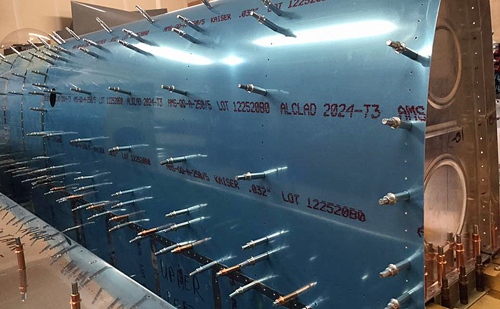 A forest of clekos holds Ron’s wing together. Not all holes contain clekos, just enough to maintain the correct shape. The blue colored areas are a protective plastic film that will be removed before painting.

Ron’s forest of clekos reminded me of my Earth walk—a life cobbled together from a thousand fragile pieces. None of them can stand on their own, endure hardship, or empower me—despite my best efforts. Gets discouraging sometimes. Life ought to be simpler. 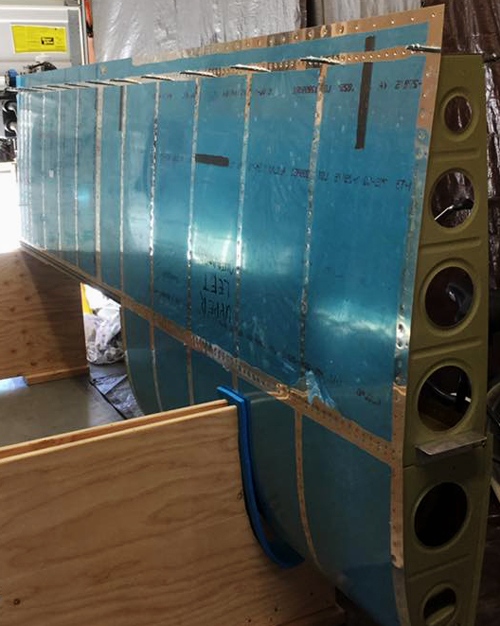 After we riveted most of the holes the wing assumed the precise shape needed to accomplish its purpose—provide lift to carry half the weight of the airplane.

Fortunately, it can be. Jesus reminded me of two things.

First, when he comes back, I’ll actually be like him.

Second, in the interim, during my planet-side gig, he provides me with exactly the right kind of fastener to keep all the loose, frail pieces of my life together so I can accomplish his purpose for me.