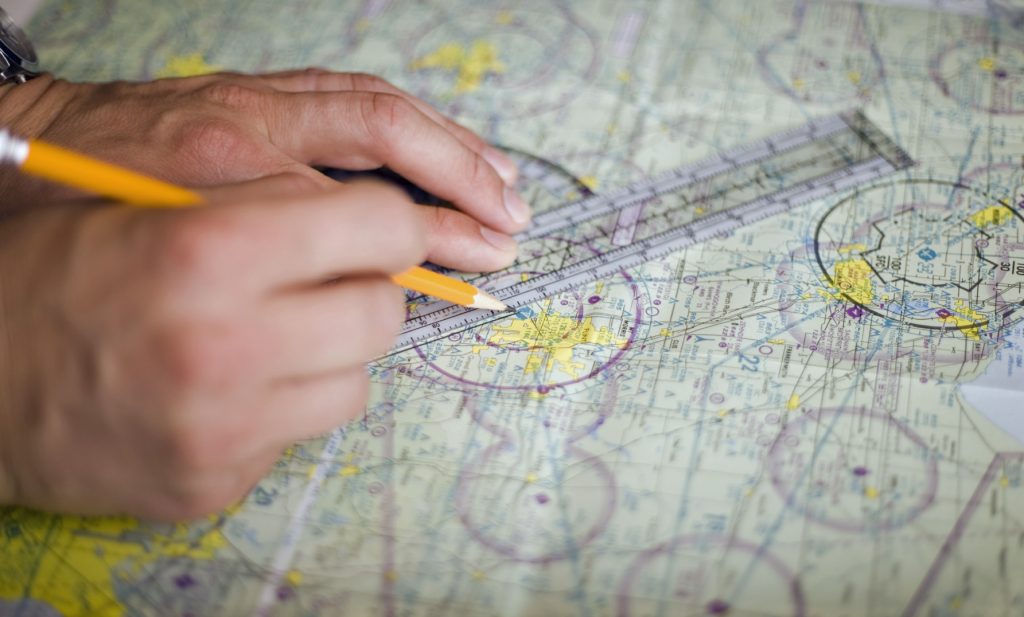 The pilot’s unique perspective rewired my brain. It replaced street and highway grids with a mental moving map that reveals the true lay of the land and plots straight lines between departure and destination.  Frustrating on the ground, but priceless in the sky. So for this morning’s flight to the Waorani village of Damointaro, I turned to the direct heading—074 degrees—and climbed to 4,500 feet (local procedures allowed us to ignore the hemisphere rule). 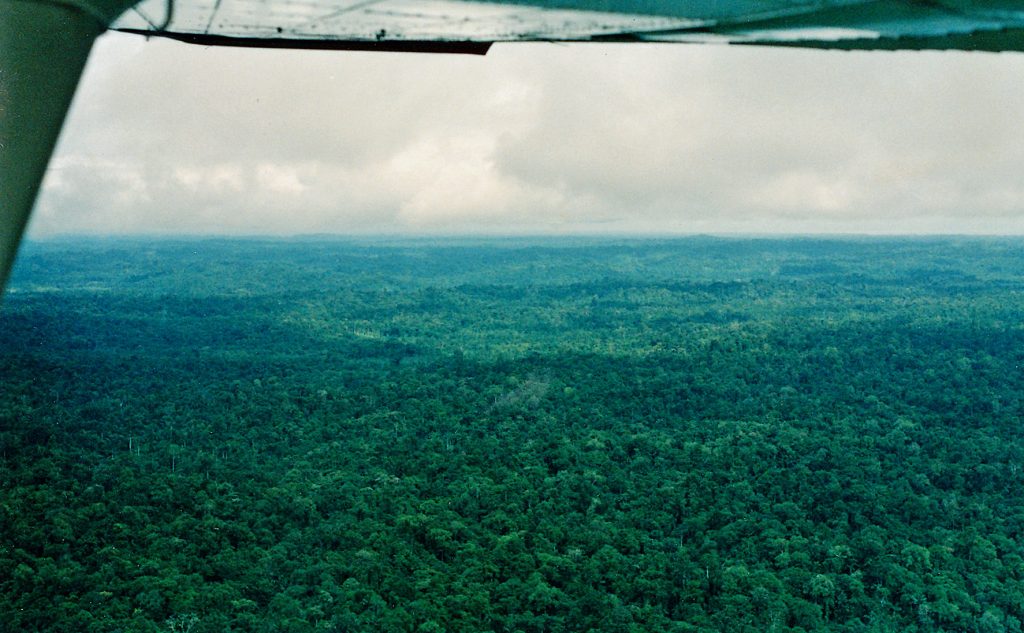 Even at medium altitudes, the Waorani territory of Ecuador’s Amazon jungle appears flat, hiding the river canyons and valleys that shelter the villages of men.

Even at this altitude, much of the Waorani territory in Ecuador’s Amazon jungle appears flat. But deep twisting river valleys cut its gentle rolls. They appear suddenly—either when flying overhead, or seen on-end—then disappear moments later as if they never existed. Those brief glimpses reveal convoluted canyons hemming in jumbles of small hills and ridges. Their deepest floors host serpentine rivers fed by webs of creeks and rivulets.

Secluded in the bottom, thatched roofs clinging to small open spaces wedged between forest and water mark the villages of men. The twisted labyrinths define their lives granting them neither experience nor concept of straight. Made me glad for the special perspective I enjoyed.

As the strip appeared off the nose I turned slightly right to fly perpendicular to the runway and enter a cross-wind leg. That positioned me to see the entire runway surface out my left window. 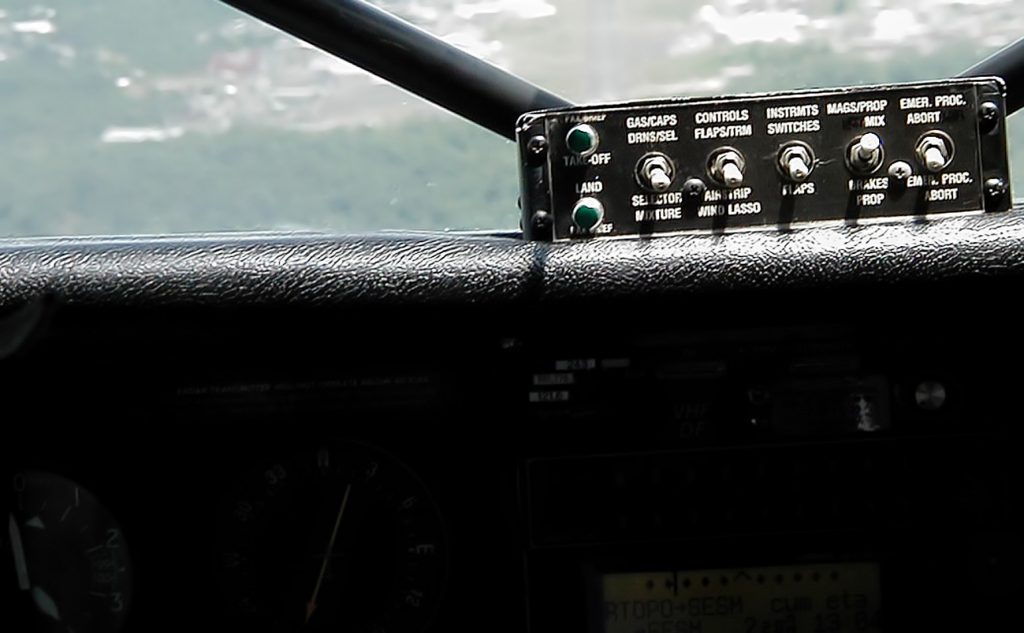 I ran through our “Wind-LASSO” checklist. 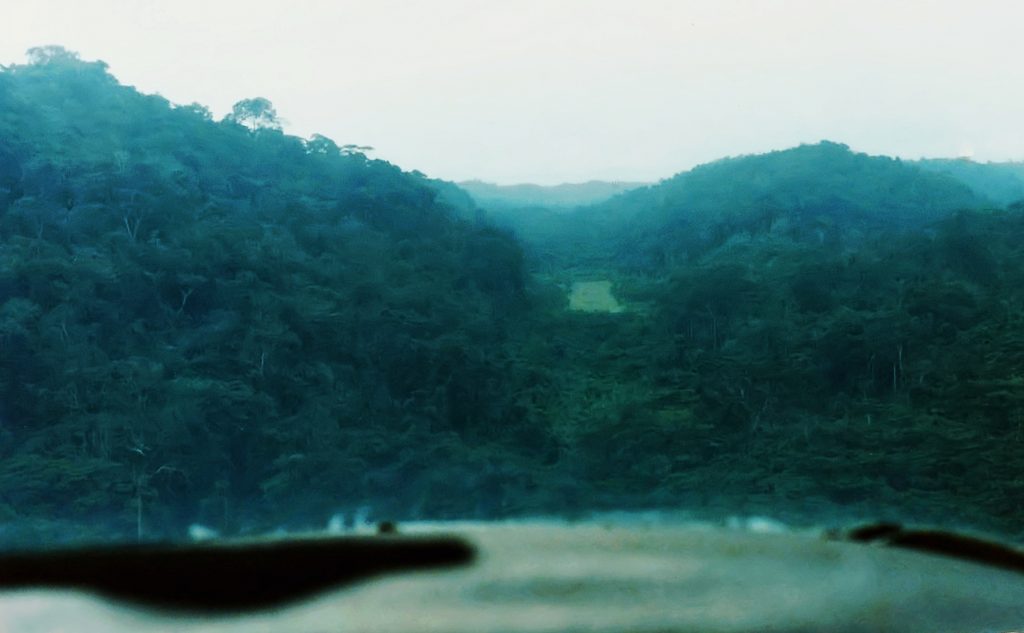 Flying through the 2nd notch on final approach to the airstrip in the Waorani village of Damointaro. I flew the downwind leg through the first notch (on the left side of the hill to the left of the airstrip) a  minute earlier.

The wind came from the west, on my right, so I planned a left turn for downwind leg through a notch between a hill on the left and the canyon wall on the right. The strip disappeared as I flew through the notch, then reappeared. I continued downwind a bit longer than in a normal pattern because the notch forced that leg so close to the runway. Finally, I made a left 180-degree turn combining base leg and entry to final approach leg in one maneuver.  That put me farther from the runway threshold than normal but presented the only option for landing in this direction. It also allowed me to direct my flight path through another notch on the opposite side of the hill.

Last night’s rain left the narrow, undulating grass strip still soft. I touched down three airplane-lengths from the approach end, then braked hard, released the brakes, braked hard, released, braked again, repeating the pulsing to prevent skidding the tires in the in the slippery grass and mud. I finally stopped the plane about 70% of the way down the strip, then turned and taxied back to the waiting crowd.

This was a big day. My passengers were Wycliffe’s Ecuador Director, their literacy specialist along with two assistants. The four came to honor graduates and discuss the program’s future. After plane-side greetings, and the typical mail and cargo distribution, the entire crowd atypically left the strip with my passengers and headed to the school house. I was left alone, standing in the grass under the wing—not a normal pilot condition on a village airstrip.

But in this case being alone was neither unwelcome nor unplanned. I came prepared. My passengers estimated their activities would run about an hour. So, lunch and a thick wad of paperwork waited in my bag stowed in the aft cargo area. I opened the cargo doors wide, untied the bag and started to climb into my temporary office seat. I purposely parked the airplane with the sun shining in the front rather than the back. Gave me shade, fresh air, room to spread out, and—most importantly—no distractions. 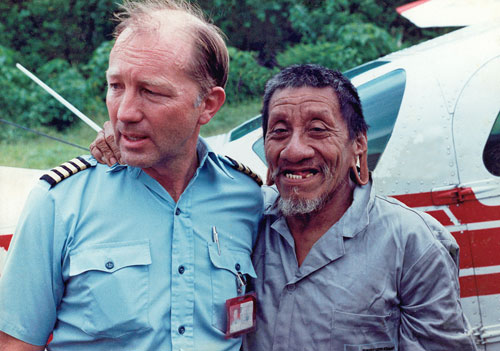 Cawena—wearing a gray shirt, a grin and absolutely nothing else—immediately treated me like his best friend.

A tap on the shoulder stopped me. I turned to face a Waorani man almost my height. I estimated him between 60 and 70 years old—not by stance, wrinkles, or gray, for he stood straight, well muscled, with chopped black hair thicker than mine—but by long, empty earlobes left over from the old style of wearing large discs in the piercing, and splayed toes that had never known shoes. He was from the generation of warrior who could kill three men in seconds, chase down a wild boar, and climb 60 feet up a smooth trunk to retrieve a stupefied monkey fallen from higher branches when hit with a drugged dart.

He wore a gray long-sleeved shirt, a snaggle-toothed grin and absolutely nothing else. Still grinning, he spoke Waorani to me, and kept on talking, greeting, questing, I couldn’t tell, but the tone was friendly, inclusive.

I answered in Spanish. He continued in Waorani. After a couple quick exchanges, I realized I knew more of his language than he knew of Spanish. I got his name, “Cawena.” He didn’t get mine (in Spanish, I’m called “Diego”), or at least didn’t repeat it.  Still leaning into the cabin to assume my perch, I indicated I had to work. He cheerfully ignored.

Decision time: Continue with my plan for my work, or take this as a divine opportunity to build a relationship? Then I recognized an acceptable compromise. My plan included a walk to inspect the airstrip. Torrential rain and relentless jungle fought to erase the works of men. Only vigilance alerted us to when and where we should fight back with cutting, filling, and clearing. I chose to do it right then. I was sure when he realized we couldn’t communicate, he’d get bored and do something else.

I moved away from the airplane and started walking down the center of the strip. In my mind’s eye, I superimposed the ideal runway form onto the vegetation before me. Was the surface free of ruts, holes, and debris? Was the grass too tall? I also scanned left and right to spot bushes encroaching onto the runway surface or growing too tall along the strip edges.

As I looked down its length, I realized I was forcing a straight, flat alien presence onto Cawena’s tangled realm. This strip connected our two worlds, an interface between his confused warren and my orderly space. Did he understand the incongruity, the vast difference? I learned long before that primitive living conditions are not synonymous with primitive thinking. The jungle folks displayed keen intellect and insightful perception. But in this case, I was certain he didn’t comprehend my sky, although I had to admit I’d be lost in his forest. Yep, two very different worlds.

We kept walking, me checking, Cawena talking with tone and pace more story than chatter. Suddenly something rose up within me, truly wanting to understand him. Not a word made sense, but his intent was clear—communicate. I stopped walking and gave him full attention. He continued narrating the tale, intent that I at least get the gist.

I’d already exhausted my minuscule Waorani vocabulary to no effect—“hello”, “goodbye (three forms depending on the leaving group’s size)”, and “yes/I like it.” So I pulled out my last trick and recited the names of other Waorani village airstrips. As I spoke their names I could see them laid out on my mental map, no need to consult the paper version.

Cawena stopped his monolog. His toothy grin changed to knowing smile. He pivoted on one heel to face northwest towards Toñompade, invisible, six miles away, in another canyon, along a different river. He extended his right arm horizontally, straight out in front of him. Then keeping his bicep level, he raised his forearm first vertical, then straight out, then back to vertical. He repeated the motion several times correctly indicating the straight line direction to that village.

Puzzled and intrigued, I slowly named another, “Dayuno.”

He turned to face the correct direction—almost due north—and repeated the motion towards the village 12 miles and three river canyons away.

He turned northeast-by-east and repeated the arm motion.

Again he turned, motioning southwest-by-west to the village 10 miles away.

“Tzapino?” I questioned with increasing incredulity.

Once more. Northeast, nine miles away.

Jungle covered, river infested geography precludes straight paths. The trail to a destination one-mile north might leave in any direction at all, then twist to cover 10 miles before arriving—if a trail existed. Except along the river, no vista beyond 20 or 30 feet presented itself. Anyone living there would know the trails intimately, but have no access to the overall picture.

I knew most of the Waorani who regularly flew with us. Cawena was not one of them. I, on the other hand, lived in the sky for years, spent hours building my mental moving map. How could Cawena know? Did he possess a special kind of sight that let him see beyond what confronted him on the trail? Where I saw only chaos, he could see overriding order.

Reminded me of a proverb that says “In all your ways acknowledge Him, and He will make your paths straight.” Many parts of my life looked like spaghetti thrown on the floor. But, every time I committed my way to Jesus he overlaid his template upon my mess and led me straight to the best destination. God’s geometry is quite different from ours.

One thought on “Straight Lines In A Different Geometry”