It was time to fulfill the second half of my promise. I successfully delivered the Bonanza to Vicksburg, MS. Next was an airline flight to Cleveland, OH to pick up a Piper Pacer and fly it back to Nampa, ID. 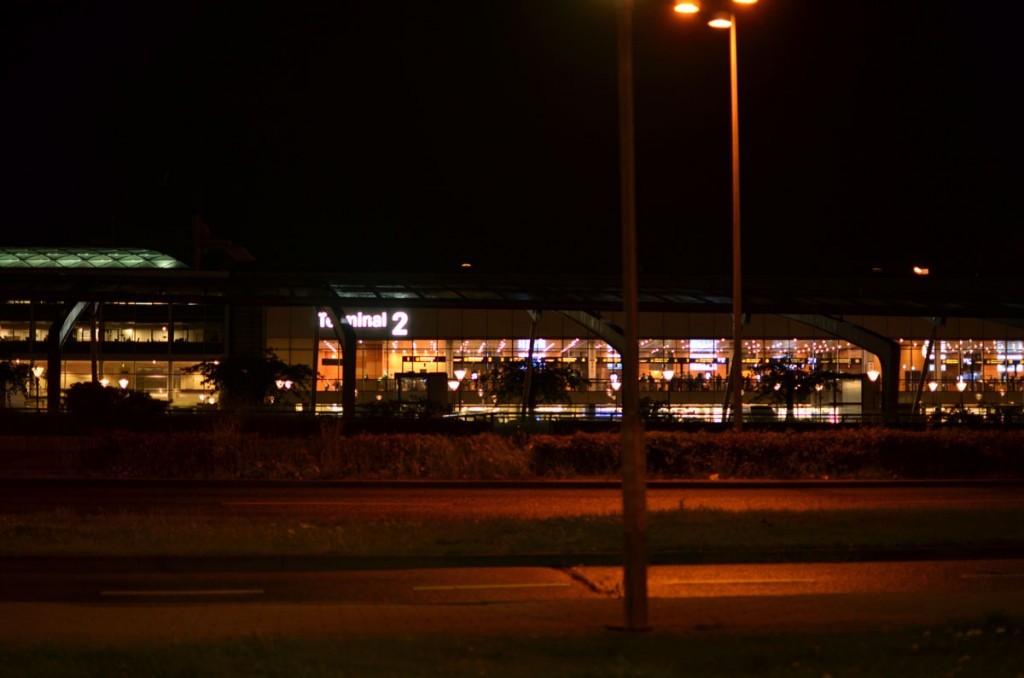 In predawn dark, five of us wrapped in private, half-awake thoughts loaded into the hotel airport shuttle. Our world extended only as far as headlights reached. A mobile world, winding on dark, tree lined roads and empty freeway ramps. The terminal entered our small orb with a wash of light. Welcome as the next journey step, but a disagreeable intruder none the less.

Silence amplified little sounds. A small cough. Travel duffles hitting pavement. Roller bag handles snapping open. Suitcase wheels click-clacking across cement. I collected mine, turned, passed through automatic doors and dove once more into the deep end. Private, self absorbed, focus stripped away. People everywhere. Lines, clusters, and groups. Polite, purposeful, but many. I queued up, got my boarding pass and checked my bag (aircraft survival kits are not carry-on friendly), queued up again for security, then queued up a third time to get on the plane.

In the air with the crowd, middle seat, unlit cabin, most passengers asleep. The day before, alone with God, hanging between sky and Earth, he felt close. Not like he was with me in the airplane, but rather I was with him in the sky. The airplane was no more barrier than my shirt. But here, in a packed aluminum tube I wondered (again), How can he keep track of everybody? 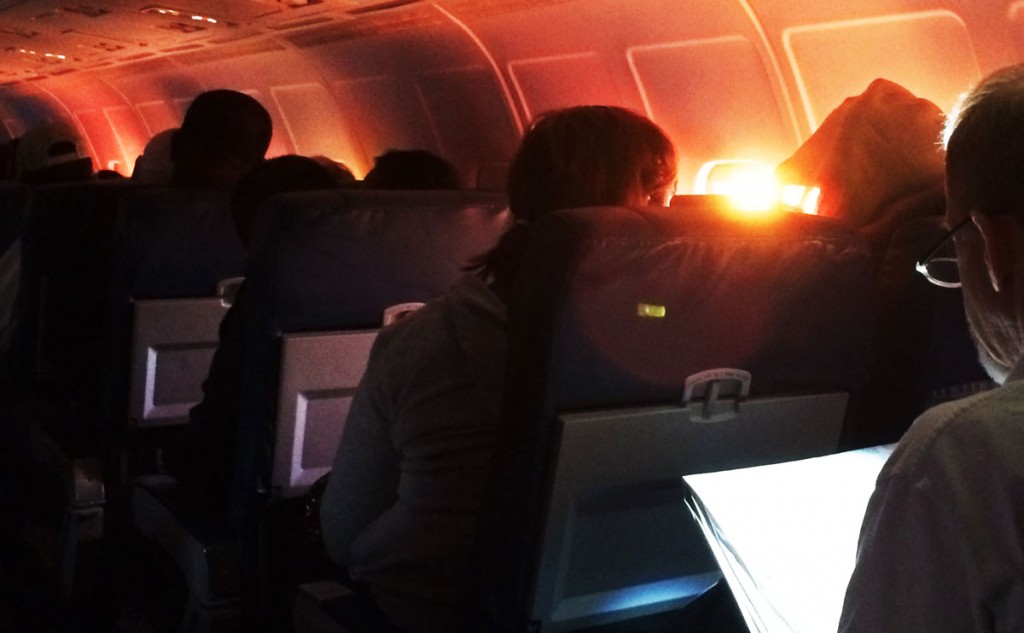 Suddenly brilliant dawn shot through windows piercing dark, coloring cabin rose. Hot spots shone through locks of hair. Heads began to stir. An overhead light snapped on. Our world awoke. And he was there, seen or not, acknowledged or not, with all of us. And with each of us. An hour later we landed and I set out to complete my mission.

The plan was simple.

Part 1: Fly the Bonanza from Nampa to Vicksburg. Catch the airline to Cleveland. Ride to the country town of Wooster. All Done.

Part 2: Check out and fly an aircraft donated to MAF from Wooster back to Nampa. Started. 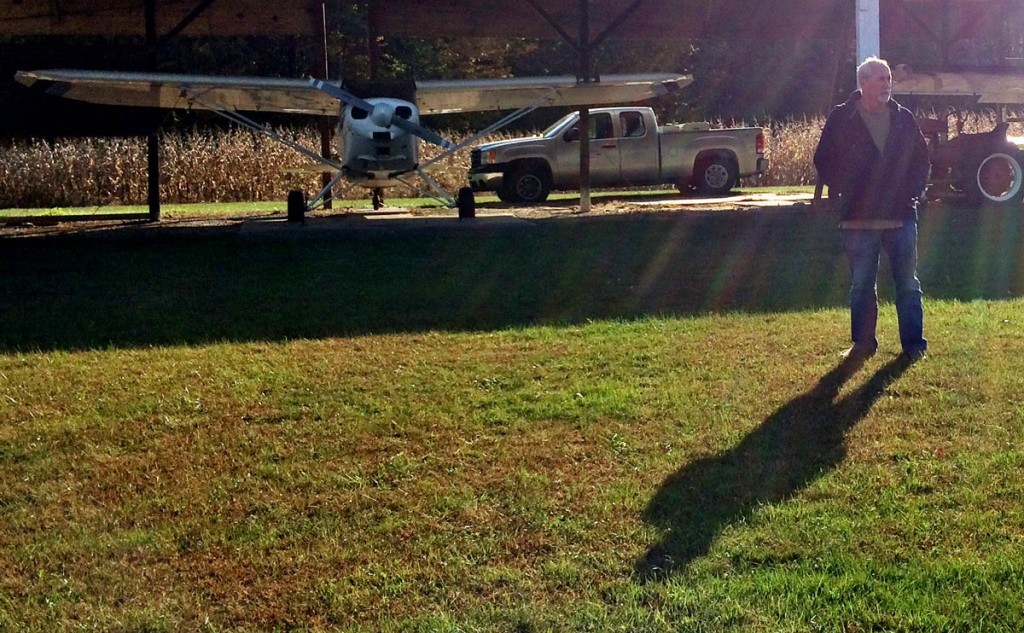 Don, like the Pacer, looked at home on the grass strip 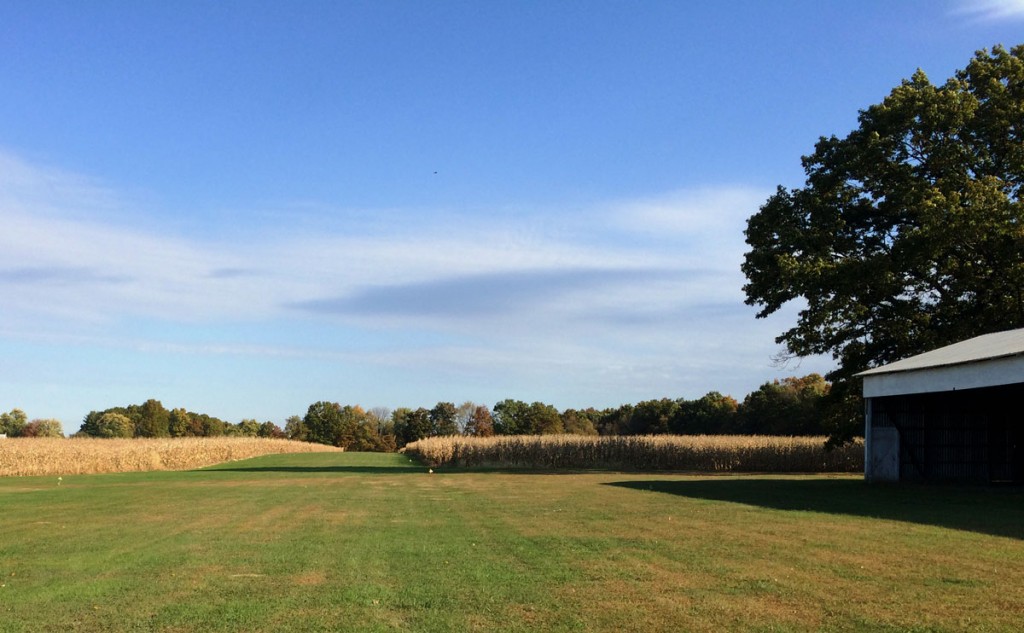 Don and I unfastened tie-down ropes. My goal, get to know the plane and be on my way west. His goal, fly his baby one last time. Different motivations, but both of us eager to fly. Well, almost. As I taxied out to strip end, the light craft rocked in irregular gusts. Repeated glances at corn and tree top suggested a challenging ride.

He demonstrated the first take off. Climbing past corn height, we rocked harder. Approaching tree height, rocking turned to slamming. Wild air cascaded over the upper branches. Invisible, tumbling rapids pitched and tossed us. In a moment the ride settled down to merely bad turbulence.

“Your airplane,” he said.

“I’ve got it,” I confirmed. Taking controls in hand, I listened to what the little bird had to say. Honest, not boastful it responded well—in between bumps. We turned north towards Wayne County airport 8 miles away. Its mile long, 100’ wide paved runway appealed as a potentially calmer practice field. Bouncing into the traffic pattern, however, suggested otherwise. Like dancing with boisterous cats, I flew the approach, then Don completed the landing. We stopped, surprisingly still on the pavement, and taxied back for take off.

My turn again. Shouldn’t have been too hard. Turn control yoke hard left to keep the wing down into the wind. Tap rudder pedals to steer over the center line. Push forward to raise the tail, then pull back to climb. 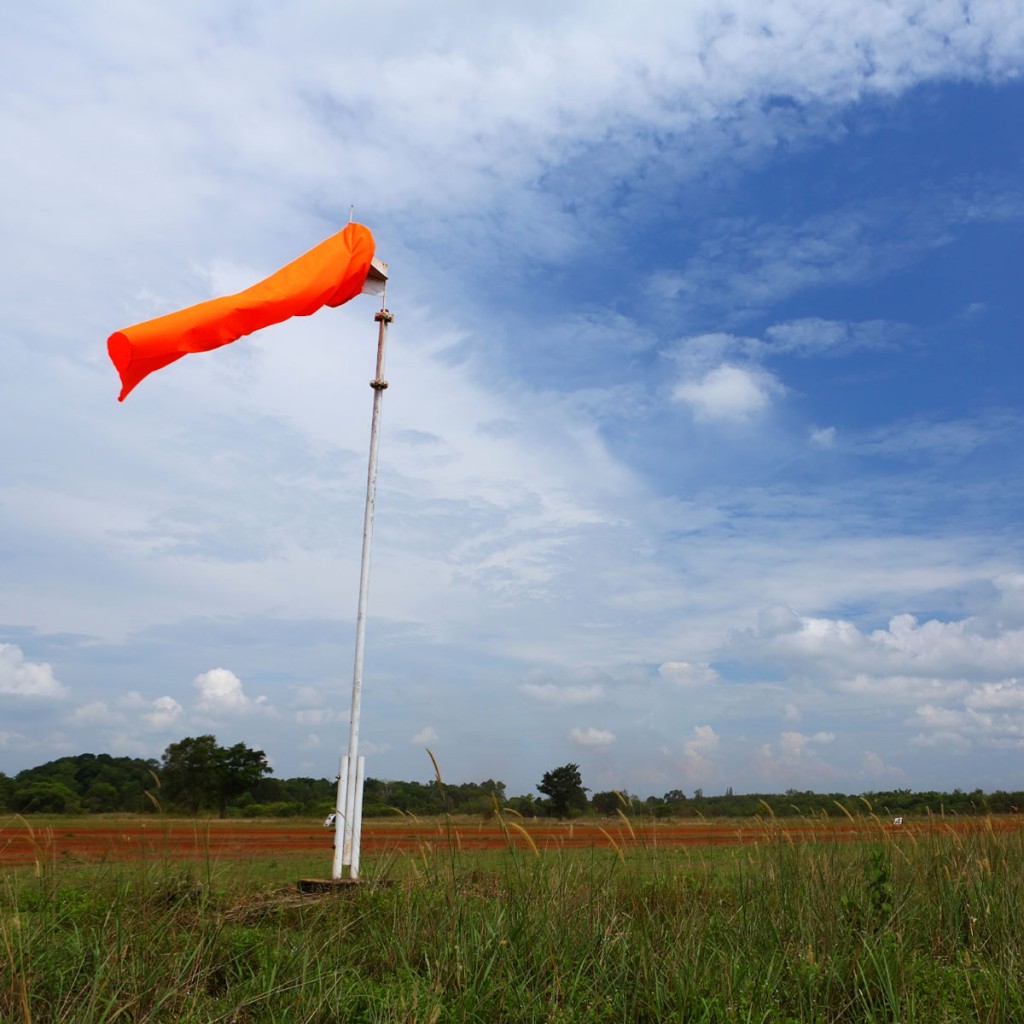 The windsock mocked and taunted us

The windsock mocked, cavorting in drunken jig. It pointed at us. Hung half way down. Stabbed straight. Swung 30° to the right. Fell limp. Gyrated franticly above and below straight. Swung again to a direct crosswind. I pushed the throttle in. We started rolling, immediately swinging left. Right rudder, more left, then farther right. We traced crazy curves across the centerline—mostly. Finally airborne we jounced around the pattern again, and again, and again. We tried another airport where Don saved us during our most exciting attempt at control of the day. Same thing. Finally, reality spoke. I could not discern the difference between my control inputs and what pummeling wind did to the plane. We were only burning gas to scare ourselves. Time to quit for the day.

Don & Pam offered bed and food. I accepted. What next? I studied weather forecasts—systems, fronts, highs & lows, ceilings, visibilities, and, of course, wind. They predicted worse conditions for several days. Next step was obvious. But my internal, esoteric dilemma had to run its course. Take the airliner back and admit defeat? Wait for better days? Hope for more courage and a sudden influx of superior skill? What would others think?

I prayed, made phone calls, checked charts again. In the morning the answer remained clear. Don graciously drove me back to the Cleveland airport where I climbed into another crowded tube headed west, still secretly wondering, “What if?”

Ironically, we approached Chicago Midway at the same time I would’ve been landing just a few miles south if I’d flown the Pacer from Ohio that morning. From another middle seat I saw tell-tale wind streaks churning lake, river and reservoir below. A bumpy approach, firm landing, and then taxi for the gate. Left of the taxiway I saw it. A windsock dancing and laughing just like its Ohio cousin. Dumping pride seemed a small price to pay.

5 thoughts on “Promises, Plans, and Pride”