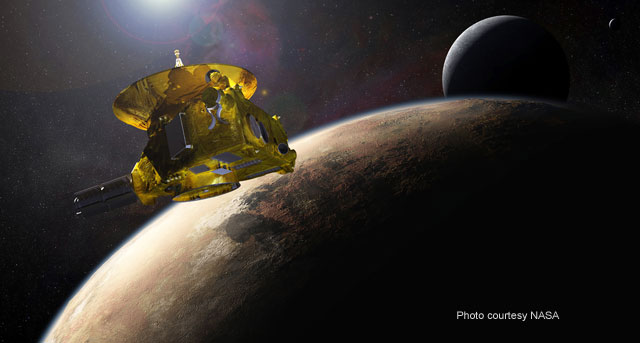 A few weeks ago the New Horizons probe flew past Pluto. When I was a kid we called it a planet, the ninth planet, the last planet, like the last house on a road leading out of town. Here in Idaho, as you pass town’s last house, you cross farm fields; swaths of corn, wheat, or alfalfa. Then you pass the ranches; open ranges of cattle or horse. Beyond that, wilderness. So, New Horizons leaves hearth and home behind and races towards unknown badlands maybe filled with dragons. Who knows? We don’t. 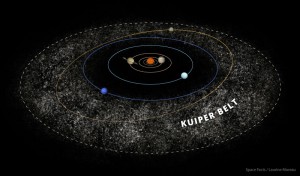 Traveling over 30,000mph, it took nine years to get there. At that speed we could get from San Francisco to London in 10 minutes. But as fast and as far as that is, it’s just local—very local. On a galactic scale, New Horizons is still in our yard. It must cross the Kuiper Belt (a ring of 100,000 or so miniature worlds surrounding our solar system) before reaching our property line at the Heliopause (where the solar wind meets true interstellar space).

If New Horizons headed to the nearest neighbor’s house (a star called ‘Alpha Centauri’) at that speed, it would need about 95.8 thousand years to get there. Hefty commitment to borrow a cup of flour. Getting to the corner store (say, at Rigel, the hot blue star in the lower right corner of Orion) to buy it, on the other hand, would take a bit longer—17.2 million years. Makes seeking a loan understandably attractive. But given natural human life-spans, both are moot.

And that’s the problem, isn’t it? We’re stuck with the wrong kind of life for star travel. No way we can even get out of our own back yard and live to bring the stories home. Like 18th century missionaries who sailed one-way voyages with goods packed in coffins, we’re prisoners here. Except in this case it’s worse. The coffin itself won’t survive the journey let alone its desiccated contents.

So why try? Some say, “Too many problems on Earth. Don’t waste time and money chasing fantasies!” Maybe. But most of us believe we have a right, even a manifest destiny, to go because “it” is there. And, because we want to—end of discussion, thank you.

Someone else says, “Nothing moves faster than light now, nor will it ever. Have fun playing in the solar system, but send probes and hope succeeding generations remember to listen.” Maybe. Sounds practical, responsible. We’ll eventually get knowledge, maybe some resources, too. But like the first group, it sure saps motivation. Why look up?

Another adds, “Ok, we might be no more than tricked-out pond-scum, but we’ve got clever brains. Eventually we’ll figure out the physics.” Maybe. Just like ships to cross seas and aircraft to roam skies, perhaps we’ll invent a warp-drive to explore space.

After a silence, somebody says, “We’ll evolve into organic, metaphysical beings. Just wait a million years or so.” Maybe. But given that genetic mutations usually subtract rather than add characteristics, seems unlikely we’ll gain the ability to breath in a vacuum, or run at trans-light speeds. Besides, present human proclivities make it doubtful we’ll last that long.

Face it. We’re trapped in a cruel paradox.

On one hand the transcendent life we expect to overtake us, continually eludes us like alchemy’s quest to turn lead into gold. We know it’s not just a better version of our present life, the kind we’d have if we ate all our vegetables, worked out, and got enough sleep. Nor is it this life on super-hero steroids. We see it’s vista flash just out of sight, hear it’s word on the tip of our tongue, or smell it’s fragrance like a dream’s lover.

On the other hand, we posses neither power nor skill to beat reality into a form that suits us. We’re doomed to scooting about our little planetary clump of reeds in crude metal cans, cursed with agonizingly brief mortality.

Turns out our dreams are right on, after all. We don’t have to wait for the favor of time and chance, nor hammer on any of creation’s constraints. Instead, we can live an entirely different kind of life by becoming an entirely new kind of creature.

Parents’ choice brought us into this kind of life. Our choice propels us into that kind of life. It’s like the difference between classical physics and quantum mechanics. Everything we see and touch operates by cause and effect. Launch the New Horizons probe at 33,000mph and nine years later it passes Pluto. We predicted where it would go and when it would arrive. As it sailed by we saw the pictures and believed that it had, in fact, accomplished what we chose.

At the sub-atomic level, however, particles challenge our logic. They do weird things like arrive before they leave, or occupy two places at once, just to name a few. Doesn’t make sense, but that’s how it works.

Becoming a new creature has a similar, backwards feel to it. First, we believe that we’re born as a new creature. Then afterwards we begin to see the new life. Our Manufacture writes in the operating handbook—the Bible—that he gave us those dreams in the first place. Then he tells us how to live them. He says “if anyone is in Christ, he is a new creation. The old has passed away; behold the new has come.” Doesn’t make sense, but that’s how it works.

One thought on “A Different Kind of Life”

For Father's Day Give
Adventure and Inspiration
Mile-High Missionary:
A Jungle Pilot's Memoir 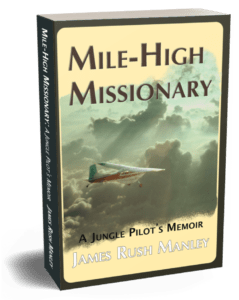