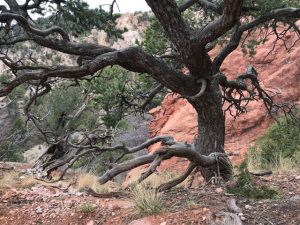 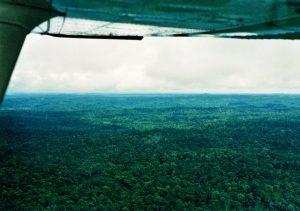 The Amazon Jungle stretches flat and featureless to every horizon.

I flew over the Amazon Jungle. It stretched like a flat, featureless sea to every horizon. Hanging there below the wings, the lone engine droning, I easily imagined it extending forever to the ends of the Earth and maybe even time itself. Hours could pass, yet the view below would always look the same—gently rolling dimpled broccoli.

But on that day I searched for a single, specific tiny scratch—an airstrip where I could land safely and disembark my passengers. No other place would do, either to fulfill my mission or enable me—and those in my care—to survive the day. The numbers were not encouraging.

The Amazon jungle covers just over 2 million square miles or about 59 trillion square feet. But the dirt airstrip—1,300 feet long by 50 feet wide with a 900-foot approach slot cut among the trees—took up a mere 110 thousand square feet. My destination occupied only one out of 538 million possible locations in that jungle. If I relied on chance alone, we were doomed to failure. 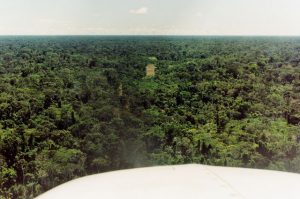 The airstrip appeared when and where anticipated—because I had help.

Fortunately, I had help. A compass, aligned with Earth’s invisible magnetic field, enabled me to fly a straight course. A clock kept rhythm with creation’s inexorable metric. And an airspeed indicator told me how far I’d traveled during each beat—so many miles for each hour I flew. Combined, those three guides gave me clear direction.

Our haven’s tiny slot appeared when and where anticipated. We landed, completed our assigned tasks, and lived another day to tell the tale.

But the odds of my finding a two-inch silver ring and stone among the bushes, scree, crevices, and trees we’d scrambled over were probably worse than one in 538 million. Unless, of course, I had help.

“Father, finding her earring has far less import than my passenger’s lives. But I know you care. Help me find it just to bless her,” I asked. In a moment an unlikely picture formed in my mind.

With doubt baying at my heels, I set out retracing our path from the beginning, scanning ahead and side-to-side, hoping what I’d seen was direction and not imagination. A hundred yards up-and-back along a side path we’d explored on our first trek, revealed nothing. On the main trail again, I pushed down the mocking jeers of impossibility, of wasted time, of stupidity and continued the hunt. 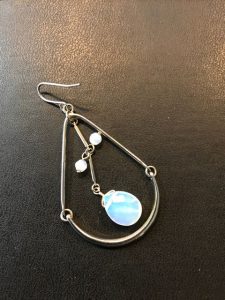 Then, a silver and white sparkle on path’s edge caught my eye. Vague vision merged with visible reality. Only twenty minutes after I started, plucking her earring from a clump of sandy grass renewed my confidence. No matter how I might feel, I was never lost among the world’s debris, hidden beyond God’s knowledge or reach. Help, indeed.