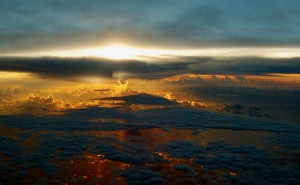 Regina & I first connected with Jerry & Donna as fellow members of a fledgling church in northern California. They became both mom & dad and counselors to us, their lovely daughters as younger sisters. Jerry and I bonded over electronics, astronomy, and space travel. And I quickly learned he liked anything that flew. I gave him flight instruction through his solo flight.

Jerry was an engineer, precise, certain—except for carefully defined uncertainty. He worked for JPL on satellite design and launches (yes, that JPL). While in southern California, he and Donna decided they didn’t like the orientation of one wing of their house. Jerry made the calculations, then hired a contractor. They excavated under the misaligned portion, disconnected it from the rest of the house, then rotated it to its new position.

Later in northern California, where we met, he started his own business designing and manufacturing wild animal tracking equipment. He made exotic devices that worked well, every unit crafted like a fine Swiss watch. No dyno-tape labels for his product, every panel featured etched or engraved markings. Elegant in the truest engineer’s sense of the word. 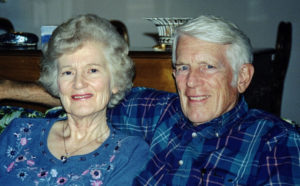 Donna & Jerry Stuart, together as they liked life best.

His growing business in the Sierra Nevada mountains demanded more space from an already full basement lab. Ever the adventurer, he opened a wall and began digging towards the foundation. Unexpectedly, a huge boulder barred progress. Close the wall and forget the idea? No way. Jerry chipped at the boulder, wheelbarrowing loads of debris out.

I teased him that God provided him a way to prove the gathering suitors. “So, you want to date my daughter? Let me show you something.” Then the admirer followed Jerry down the stairs, through the hall, and into the digging. There, I said, Jerry would hand the unsuspecting fellow a sledge-hammer to begin his Trial of the Rock. Only the worthiest had a chance.

In the end, he made more calculations then hired a demolition expert. They drilled holes in the boulder, stuffed them with measured charges, laid a special pad across it and blew the rock into gravel—underneath the living room. 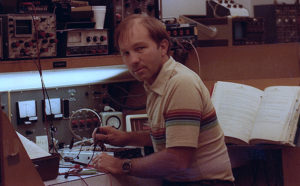 As Regina & I prepared for service with MAF (Mission Aviation Fellowship) where I’d work as a pilot/avionics tech combo, Jerry became my tutor. I was already a professional aviator, but my electronics background only flirted with pro levels. Truth was, I needed help to pass the evaluations. I’d appear, unannounced, perplexed. Jerry set aside his work and walked me through the latest esoteric puzzle. Things like, illuminating solid-state theory in my transition from tubes to transistors to microchips, or revealing what impedance really meant and how to deal with it. 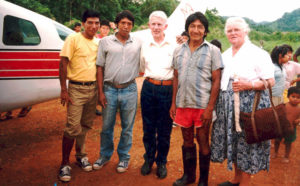 Jerry accompanied me on jungle flights. Here he stands with three Waorani men and noted missionary, Rachel Saint, at the Toñompade airstrip in Ecuador’s Amazon jungle

Jerry & Donna supported our work in Ecuador financially and with their sweat. They traveled a number of times to our jungle base in Shell. Donna worked in the mission school. Jerry helped in the radio shop. They both became part of our small, but passionate community, cheerfully tolerating their bat plagued apartment.

Regina & I transferred to our home staff in Idaho. Jerry & Donna moved to Santa Barbara. We saw each other once every year or so. Then one day Jerry called.

“Brent?” I asked. “What a coincidence. There’s a Brent Ave just a half mile from the MAF office.”

“That’s the one,” he said. I could hear his smile over the phone.

We enjoyed too few years together here in Idaho. Jerry turned his engineering genius to woodworking, crafting amazing pieces from exotic woods. They continued supporting our mission work. The four of us sometimes did lunches together. Even so, we saw Jerry & Donna too infrequently. But every time was a joy. Two things stand out—Jerry’s total commitment to care for his bride, and how he continually referenced everything he said or did back to God’s plan. I’m sad he left, but glad he arrived at our home office where I’ll get to see him again.