In contrast, my father’s stories of 1940s flying in the clouds held almost horrid fascination. Clunky, hard to read instruments scattered haphazardly around the panel dared the pilot to keep wings level and nose on the horizon. To navigate he clamped hard plastic headphones to his ears. Then straining to discern man-made signals amidst nature’s static crashes, he steered the airplane along an A-N Beam until he found a course that merged scratchy dot-dash “As” with dash-dot “Ns” with into a constant tone. Once attained, he held that course—for hours. 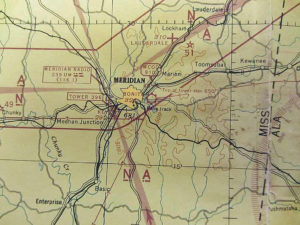 But during the modern times when I learned to fly inside clouds, the default panel sported six, same sized, round instruments set in a standard arrangement colloquially called a “six pack.” The panels of virtually every IFR certified airplane from two-seat trainer to 300-seat airliner used the same configuration. Two neat rows of three instruments each, one above the other, were centered directly in front to the pilot—and copilot, too, on the big birds. 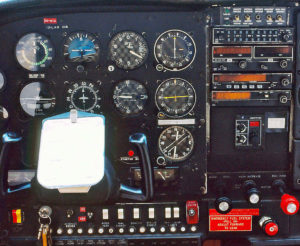 C-185 panel with the “six-pack” directly in front of the pilot. The two gauges to the right of the six-pack are radio navigation indicators.  The radio stack on the right features King Silver Crown radios on top. The small control head in the middle of the blank panel is a Codan HF radio.

In the top left corner, the Airspeed Indicator displayed the airplane’s speed through the air.

Moving right to top center, the Artificial Horizon showed both the wing’s angle of bank and the nose’s position compared to the horizon.

To its left lay the Heading Indicator, a stable reference indicating the direction the airplane was heading.

And finally, in the six-pack’s lower left corner, the Turn Coordinator revealed both the airplane’s turn rate (if any) and whether the airplane slipped or slid sideways through the turn.

Navigation required only two things—fly to keep a needle centered on the desisted course, and note progress along the way be reaching designated intersections, or else read the miles counting down on the DME (distance measuring equipment) display. Simple.

As an instrument flight instructor and commercial air-taxi pilot, I safely covered many miles inside clouds using better technology than the lunar astronauts had at their disposal. Flying on instruments was a routine part of a routine day. But when I moved to flying for MAF (Mission Aviation Fellowship) in the Amazon Jungle and Andes Mountains the regimen changed. The crew there focused on the critical nuances of bush flying. Their mentorship even managed to turn me into a useful contributor within that difficult environment. But, although rated and qualified, they only used instrument flight as a backup. 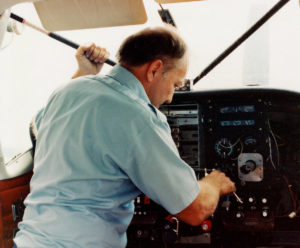 And, the planes—Cessna C-185s and a C-206—sported less than optimum panel layouts and radios. So, wearing my other hat as on-site avionics guy, I upgraded all seven aircraft with King Radio Silver Crown stacks. And, as each plane came up to modern standards, I used it within the Ecuadorian instrument flight system as often as necessary to complete any given mission. Before long the better equipment persuaded the other guys to fly instruments routinely as well.

But then I transferred back to our headquarters in the USA. My new, welcomed writing assignment also, unfortunately, moved me from getting paid to fly, to paying to fly. That challenging financial transition cost me my instrument and PIC (pilot-in-command) currency.

Eventually, finances improved. I jumped back into the game, learned new airspace nomenclature, remembered how to keep the pointy end of the airplane in front, and passed a BFR (Bi-annual Flight Review). Great to be in the air again! But, limiting flight to daytime, VFR (Visual Flight Rules) quickly presented problems. A trip planned to a chosen place at a chosen time often fell victim to the visual restriction.

The next step was obvious. I studied and practiced for an IPC (Instrument Proficiency Check) fully expecting to find rusty spots. Flying solely by reference to an aircraft’s instruments mimics playing a musical instrument. Remembering doing it well is not at all the same thing as actually doing it well. Currency counts. A lot. But two things surprised me.

On one hand, my skill controlling the airplane in simulated IMC (Instrument Meteorological Conditions) came back right away. My scan started a bit slow, a little erratic but quickly settled into the old pattern—almost like I’d never been away.

On the other hand, the modern, high-tech gear I flew for so many hours mysteriously aged—suddenly old, almost obsolete. My hard-earned, second-nature skills became moot, my experience mere memory.

Hours of repeating the same disciplined scan across the entire panel taught my brain to morph six wiggling needles into one blended, three-dimensional picture. But now, instead of the familiar stable of round gauges, a glowing book-cover sized square sat directly before me displaying a complete picture of the airplane’s attitude—bank angle, nose position, airspeed, altitude—in one place. Easier, quicker I had to admit, but also mesmerizing. I forced myself to keep scanning, to check things like engine health and fuel quantity. 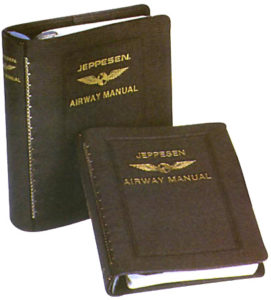 The substantial Jeppesen leather chart binders were the mark of the professional aviator. Strangely, I found myself waxing nostolgic for the tedious revision filing ritual.

Oddly, the new, easier navigation actually presented the biggest challenge. Paper charts were out. I no longer needed the carefully folded en-route map secured to my kneeboard where I’d move my right forefinger slowly along the airway, tracking my approximate position. Usually eager to adopt new stuff, I had to confess that I missed the aroma and heft of Jeppesen’s substantial leather binders. Their gold lettered covers were subtle badges of the professional aviator. And, surprisingly, I even missed the tedious revision ritual, swapping out approach plates to places I’d never landed had provided an ever changing travel preview. 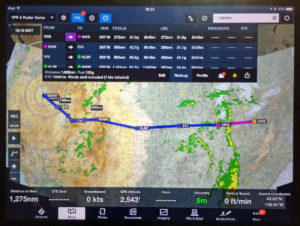 The ForeFlight app on my iPad gave me all the data I needed to stay on course from Ohio to Idaho.

But, a ForeFlight subscription coupled with my iPad’s GPS replaced all that. It faithfully displayed my position anywhere on the face of the Earth within 30 feet. The slim device strapped to my knee contained more electronic charts than my flight bag could ever hold—always accurate, instantly updated, continually moving as I flew. I no longer filled in the navigation log’s tiny squares. The ForeFlight app already knew and willingly shared the calculated distances, headings, and arrival times for the entire trip. And if I needed to divert, I just touched thumb and forefinger to the display. Distance, heading and time to the destination magically appeared. If I entered a new waypoint, the log automatically updated.

Previously, as I moved along a flight’s path, I selected the nav-aid to follow, dialed-in the airway’s heading, chose how to identify the intersections, and then tuned-in the approach facility—NDB, VOR, or ILS. My brain was the clearing house, the central processing unit that transformed the separate inputs in a unified whole. 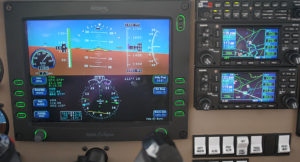 But the new system, using radios like the ubiquitous Garmin GNS 430, usurped my place in the loop. Following instructions, I plugged in the route’s origin, waypoints, and destination. Then the black box processed the info behind the curtain and presented a finished plan. My only task was to follow the magenta line and turn when it said to turn. Flying the route proved easy. Learning to use the black box, however, threw down a formidable gauntlet.

I read the manual. Watched YouTube videos. Downloaded and ran the simulator. Practiced in the airplane. Repeated the cycle. Once. Twice. Three times. Learning the box’s unique language required more effort than regaining aircraft control proficiency. Eventually, it came together. I passed the IPC feeling comfortable about my next venture into the soup.

And I did identify a seminal shift. Today, airplanes no longer carry avionics. Rather, avionics wear airframes. The new technology charges a high price. Flying a new, near magic, black box demands as extensive a checkout as flying a different airplane. It also makes me wonder what we’ll be flying when this technology becomes the old way and how well I’ll adapt.